You dream of Thailand. The sun, the magical temples, the beautiful beaches, delicious Thai food, the culture and the adventure of it all. You contacted a local travel agency. You’re ready to book your flight. But first…when is the right time to go? Will rainy days spoil your holiday? How will your trip be affected by the weather? What would you like to know about the weather in Thailand?

If you want to know the best time to visit Thailand, the real answer depends on your preferences. In other words, it differs for everyone. So how can you figure out when is the best time for your trip? Some like to joke that Thailand only has three seasons – hot, hotter, and hottest. While there is some truth to that, here’s how Thailand actually breaks down its seasons:

While it’s true that it never really gets cold in Thailand, there is actually a “cold season” there. If you’re from a freezing place like Michigan or London, you probably laugh at the notion that 60-65F is cold. This season generally lasts from November to February, and it is probably the most pleasant time to travel in Thailand.

The hot (or dry) season lasts from February to May. There are lots of hot, sunny days during this time. In the northern part of the country there’s very little rain, and even droughts, while in the south on the islands there’s already quite a bit of rain.

The rainy season in Thailand lasts from May to October. Usually it will rain once a day for a few hours, so it’s really not that bad. Keep in mind, though, that some places may experience flooding during the rainy season. 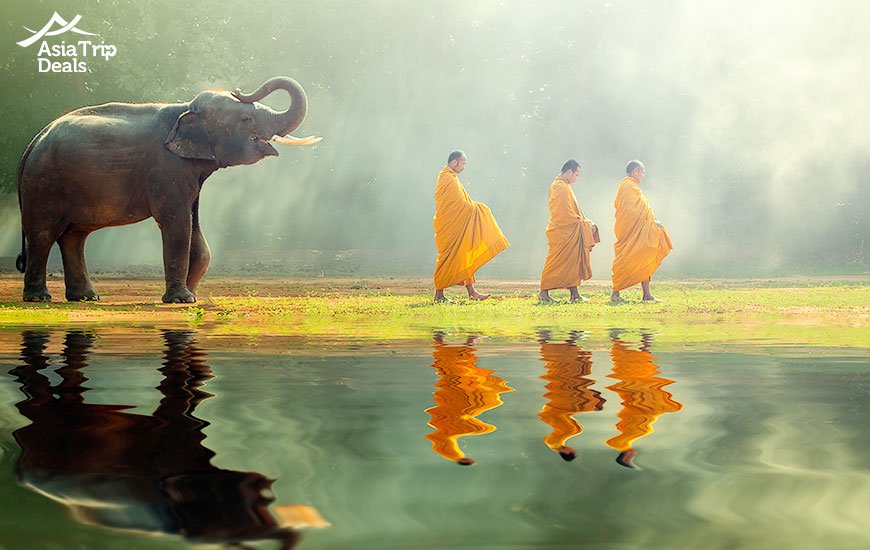 For your reference, here is a summary of the weather conditions in Thailand.

– January
January has good weather conditions throughout Thailand and is one of the best months of the year.
In the north, it is cool and dry, with a refreshing breeze and an average temperature between 20 – 24°C. This is the perfect time for trekking, and cycling in the Golden Triangle region and Chiang Mai.
In the south, the beaches’ conditions are similar on both coasts with cooling breezes and average temperatures between 26 – 29°C.
However, while rainfall on the west coast beaches is rare, the east coast such as Koh Samui and Koh Pha Ngan may experience the odd short shower. The dry conditions and warm sea temperatures are also ideal for diving in the west coast around Phuket, Khao Lak and Krabi.

Much of northern Thailand is cool in February, with little chance of rain and an average temperature between 20 – 25°C, making it ideal for outdoor activities. This is also one of the driest and warmest months for exploring the rainforest of Khao Sok National Park.
The south is sunny, dry, with clear blue skies, little chance of rain and average daily temperatures between 26 – 31°C. The islands of Koh Chang and Koh Kood on the east coast of the Gulf of Thailand may experience the occasional rain shower but nothing major. Diving continues being an ideal activity on the west coast around Phuket, Khao Lak and Krabi, with good underwater visibility and water temperatures around 27°C.

Temperatures start to rise throughout Thailand, most keenly felt in Chiang Mai, Khao Sok National Park, and the northern regions, as winter draws to an end. Although the weather is dry, humidity levels are high and the temperature can hit 33°C.
High temperatures of up to 35°C and little chance of rain is expected in Bangkok and central Thailand, making sightseeing more challenging, so plan for shorter experiences rather than all-day visits.
The south is sunny, dry, with clear blue skies, little chance of rain and average daily temperatures between 26 – 31°C. The west coast beaches of Phuket, Khao Lak and Krabi are marginally warmer than Koh Samui and the east coast beaches. Diving continues being an ideal activity on the west coast, with a good chance of spotting manta rays and whale sharks during March.

Temperatures throughout Thailand in April can be summed up in one word: “hot”, with average temperatures in the high 30’s°C a frequent occurrence. The heat in Bangkok and central Thailand around Kanchanaburi can be particularly oppressive, making sightseeing challenging, so plan for shorter experiences rather than all-day visits.
In the south, the temperatures are slightly cooler with temperatures between 29 – 34°C. The east coast beaches are the better this month as showers take over the west coast beaches of Phuket, Khao Lak and Krabi. Diving on the east coast becomes more favorable than the west coast, with good underwater visibility and the possibility of spotting whale sharks around Koh Tao and Koh Samui.

The temperature drops slightly throughout the country, and most regions welcome a significant rise in rainfall, but nothing major to avoid visiting Thailand.
Khao Sok National Park is warm with high humidity levels, with a high chance of rain on the west coast beaches of Phuket, Khao Lak and Krabi. 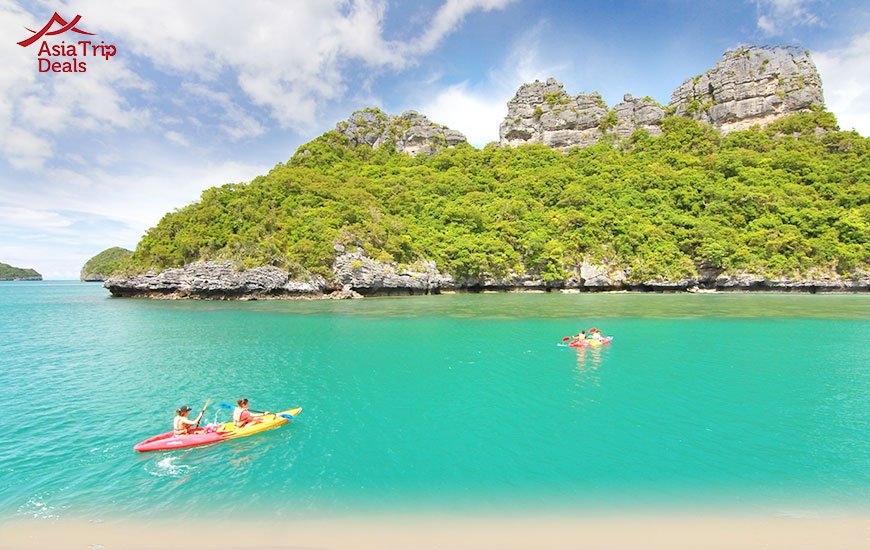 Short downpours with periods of good weather characterize June. The average temperature is around 29 – 31°C, and the humidity level is high.
In the northern and central regions of Thailand, the rivers start to rise with the return of rainfall, and the hills and rural countryside become greener. Trekking in the Golden Triangle region will be muddy.
Weather patterns in the south and on the islands are similar to May: warm, wet, with a high chance of rain.

The temperature decreases slightly throughout Thailand in July with average temperatures of 28 – 29°C, but rainfall increases with short daily showers.
In Chiang Mai and the Golden Triangle region, heavy rains will make trekking difficult.
Koh Chang and Koh Kood are particularly wet in July, and the west coast and the beaches of Phuket, Krabi and Khao Lak have a much higher chance of heavy downpours than the east coast beaches of Koh Samui, Khanom and Koh Pha Ngan.

Temperatures in August continue to drop slightly, down to 26 – 30°C, while the humidity level remains high as rainfall peaks across much of Thailand. In rural regions such as Chiang Kham, the rain can make traveling around difficult. Koh Chang and Koh Kood will also experience their wettest month of the year with daily downpours.
As with previous months, Hua Hin and Cha Am, and the east coast beaches of Koh Samui, Khanom and Koh Phan Ngan continue enjoying drier conditions with plenty of sunshine.

– September
September marks the wettest month of the year throughout Thailand. All corners of the country receive rain in varying amounts. Temperature is expected to decline significantly and the humidity level reaches its peak. Beach conditions are poor with heavy rain and rough seas in both west and east coasts.
However, a comfortable temperature level around 26°C, green and lush rainforests, and low season hotel deals makes September nonetheless an acceptable month for traveling.

The rain starts to recede in October, and humidity levels fall as the month progresses. Temperatures also decline to 24 – 27°C as October marks the start of “winter” in Chiang Rai, Chiang Mai and the rest of northern Thailand.
The beaches in the south such as Phuket, Khao Lak and Krabi experience the wettest conditions. Khao Sok National Park is also at its wettest this month.

Sunshine returns in November although temperatures are still comfortable and humidity is no longer an issue.
Chiang Mai, Chiang Rai and the rest of northern Thailand enjoy sunny days with pleasant temperatures, making it a great opportunity for outdoor activities. Kanchanaburi is also a great choice as this lovely weather pattern also flows through central Thailand.
This is a suitable month for beach lovers, as the islands of Koh Chang and Koh Kood, and the beaches of Hua Hin and Cha Am are filled with sunshine, less rainfall, and lovely average temperature of 28°C. The west coast beaches of Phuket, Khao Lak and Krabi are preferable over the east coast resorts of Koh Samui and Koh Pha Ngan, as the east coast is in the midst of its wet season.

The best month of the year for visiting Thailand. With minimal rainfall, favorable temperatures, and plenty of sunshine, this is the most ideal time for creating unforgettable memories.
Northern Thailand enjoys favorable weather conditions for trekking in the Golden Triangle region and cycling around the Chiang Mai countryside, with temperatures around 23 – 25°C.
Low humidity levels and an average temperature of 26°C in Bangkok and central Thailand make it ideal for sightseeing.
Sunseekers have the pick of any Thai beach in December, with daytime highs of 31°C not uncommon, and blue skies being the order of the day. The only region with any amount of rainfall is the south-east coast of Koh Samui, Koh Tao and Khanom, although plenty of sunshine punctuates the showers. Dry conditions and warm sea temperatures on the west coast make December an ideal month for diving around Phuket, Khao Lak and Krabi. 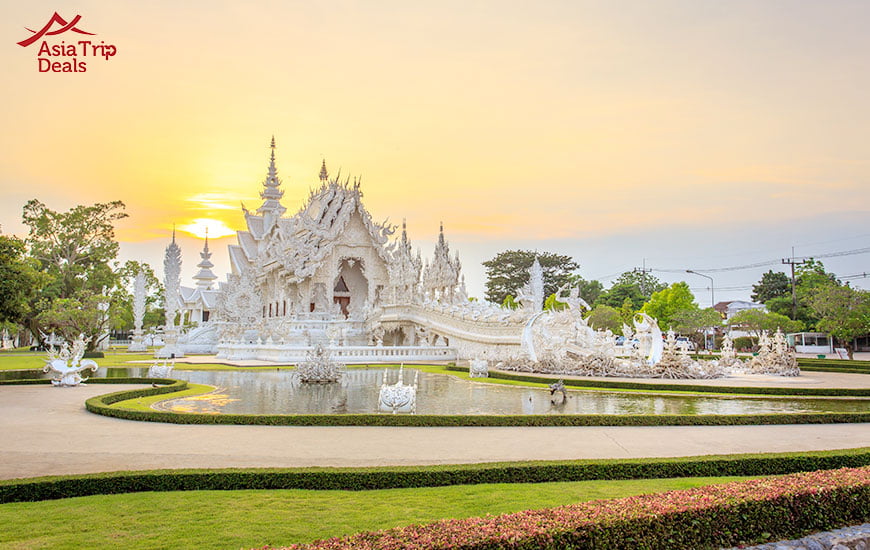 In general, the climate varies throughout this country, makes it possible to visit all year round. However, a lot of people think that the best time to visit Thailand is between November and February when the weather is at its best.

Let Us Help You Plan Your Thailand Trip.
Don’t let the planning stress you out. Tell us your travel ideas and our travel advisors are very glad to give you suggestions and guidance for your trip planning. We can tailor-make your trip according to your interests and requirements, and help to find the best time of year to go to Thailand for you.

Bangkok → Ayutthaya → Hanoi → Halong Bay → Hue → Hoi An → HCM City→ Cu Chi Tunnels → Mekong Delta → HCM City → DepartureDiscover the best of Thailand and Vietnam in 17 days with this tour! Wander through the lively streets of Bangkok and see its most popular sights and the life along the river on a long-tail boat...
View Details Enquire Now